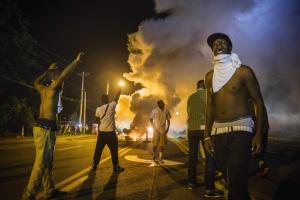 “A well regulated militia being necessary to the security of a free state, the right of the people to keep and bear arms shall not be infringed.”

Progressives like to tell us that the Second Amendment is wrong and outdated, they like to emphasis the “well regulated militia” portion to claim it’s no longer necessary that an individual is able to possess a personal firearm.

If nothing else, the recent events in the St. Louis suburb of Ferguson, following the Grand Jury’s decision in not prosecuting Officer Darren Wilson. The rioting, the slow and weak government response to the widespread violence and looting would prove them wrong.