Within the last couple of days a Stand with Hillary country music video has been making the rounds. This has been met in conservative circles with all the mocking and derision that this video deserves. To my uneducated musical ears the instrumentals sound awful but it’s the lyrics that I find totally inane.

“I’ve been thinkin’ about one great lady like the women in my life
She’s a mother, a daughter, and through it all, she’s a lovin’ wife”

While I agree that the song deserves all the criticism that it has received, I have another take on it. In the quarters that thought up this song, they had to think this would somehow appeal to country music fans. As a country music fan, that is what I find incredibly insulting. Apparently in the minds of the writers and the Hillary supporters, they think so little of the country music crowd that they would accept this vapid rendition and suddenly fall in line with the Hillary in 2016 campaign.

I think that Bud Davis once said it best “All cowboys ain’t dumb. Some of ’em got smarts real good, like me.”

Who can forget Ms Clinton’s (in fake southern drawl) “Aww don’t feel noways tired. I’ve come too faarrr from where I started frum.”

Or, as the “liberal chick” say 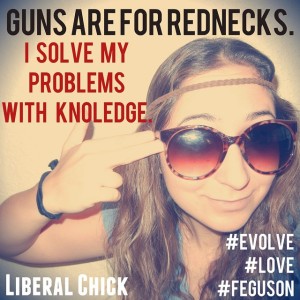