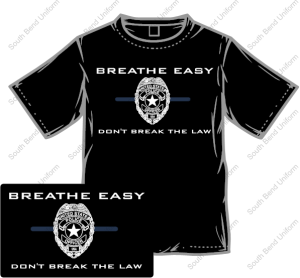 There is an issue that started in my local South Bend community that has gained some  national attention that I would like to address and that’s the creation of the “Breathe Easy” T-Shirt.

First I would like to give three points for clarification, number one, the officer involved is a Mishawaka police officer and for those unfamiliar with the area it should be noted that Mishawaka is a part of the greater South Bend “metro” area. Number two, my interest in Louisville’s news goes back to the fact that I spent the majority of my life in Louisville until I moved to the South Bend area about 10 years ago. Lastly, I’m writing this from the prospective that I’m taking Officer Jason Barthel at his word as he has no history of activism and to the best of my knowledge I’ve never heard his name before.

The following letter appeared in Louisville’s Courier Journal that I felt the need to respond to:

Indiana police officer Jason Barthel is cashing in on the popular social justice slogan, “I Can’t Breathe,” which echoes the last words of Eric Garner and symbolizes the fear and danger which American citizens, particularly black ones, experience in dealing with law enforcement. Barthel is selling shirts that read “Breathe Easy: Don’t Break the Law.”

Ignoring for a moment the abundance of tragic instances of the fact that obeying the law is in no way a guarantee of avoiding arrest, injury or death at the hands of police, take this statement at face value: The only people who should anticipate being generously permitted to draw breath are those not breaking any laws. Another way of phrasing the slogan on these shirts is, “If you commit a misdemeanor, cops are entitled to kill you in the street.”

Sentiments such as this are why I roll my eyes when the right rants about defending freedom from tyranny. As long as their personal favorite guns, foods and TV shows are not threatened, conservatives are always the loudest cheerleaders for out-of-control, unaccountable abuse and terror inflicted by government agents.

The comment section included calling Officer Barthel a punk, claiming he was in it for a quick buck and that he was making fun of the death of Eric Garner. I pointed out that Progressives like to comment on things they now nothing about and of course, I came under attack. Generally I don’t respond but in this instance I did. If you want to see the exchange you can click on the link above.

Here’s the truth behind Officer Jason Barthel’s motivation of the printing of the Breathe Easy T-Shirt. On December 13th, before the then second ranked Notre Dame’s women’s basketball game the team entered the court wearing the above pictured “I Can’t Breathe” shirts that were created in response to Eric Garner’s death. For those that don’t follow women’s college basketball it should be pointed out that there is no parity in the sport, there is Connecticut and a very few others that are in the elite class followed by everyone else. Notre Dame is one of the few that can typically compete on the top level. It should also be pointed out that the women’s team here is a lot more popular than the men’s team, often playing before a full or nearly full houses. As in most of women’s basketball the most ardent supporters tend to be an older demographic. As you can imagine this did not set well with those fans and unfortunately and apparently unbeknownst to the team this coincided with the 11th anniversary of the deaths of Mishawaka policemen Thomas Roberts and Bryan Verkler who were shot and killed when responding to a “shots fired” call. The team’s wearing of the shirt was picked up by major media most notably ESPN. 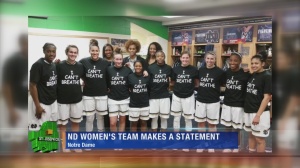 Enter Mishawaka Police Corporal Jason Barthel who also owns South Bend Uniform (http://www.southbenduniform.com/) who felt that the team’s action was a measure of disrespect to the police community leading to his creation of the “Breathe Easy — Obey the Law” shirt that his company has marketed. This, of course, has led to quite a bit of local discussion both pro and con. The “Obey the Law” section has led many to claim that police are saying they have the right to shoot those that commit minor offenses. My personal belief is that the statement should have read “The Police are Here to Protect and Serve” or a similar message. You can read Officer Barthel’s explanation of why he created the shirt here: http://www.southbendtribune.com/news/business/mishawaka-cop-hopes-to-add-new-perspective-to-police-race/article_3f804ad4-5d82-5160-bf26-d40c8106a983.html or you can simply search “Jason Barthel Notre Dame Woman’s Basketball team” on your search engine of choice for more perspective. It was also claimed that Officer Barthel was only in it for a “quick buck” however the shirts only cost $7.95 and from the proceeds they made a $5.000 contribution into a fund set up for the families of the two Mishawaka fallen police officers. I also expect that they had no expectation that the would gain the national attention that it did as it was covered by such outlets as the Huffington Post and the Washington Times.

The end result of the shirt in the local area is that it sparked the ubiquitous liberal catch phrase of “starting a conservation” where the powers that be at Notre Dame met with the local police departments and the following week several local law enforcement officers stood on the sideline with the team during the playing of the National Anthem: