**Please note that there is an update following the main article**

The Washington Times, among others, are reporting that the “Al Sharpton group stages hunger strike for Loretta Lynch confirmation.” Loretta Lynch is the President’s nomination to replace Eric Holder as the head of the Department of Justice. Her nomination passed out of the Senate Judiciary Committee by a vote of 12 – 8 including the yes votes of 3 Republicans, Orrin Hatch, Jeff Flake and Lindsey Graham. The final vote on her confirmation has been held in the Senate since February 26th.

In this CNN report, President Obama had this to say about the delay in the final vote “There are times where the dysfunction in the Senate just goes too far. This is an example of it” and “Enough is Enough. Call Loretta Lynch for a vote, get her confirmed, let her do her job. This is embarrassing.” 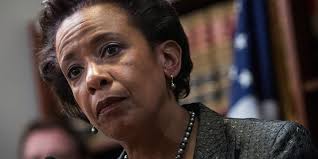 What’s not being widely reported is the reason that the final vote on Ms Lynch’s confirmation has held up. The Republican in the Senate are withholding a vote in order to combat the Democrats filibuster on S.178 of the 114th Congress or the “Justice for Victims of Trafficking Act of 2015.” The bill was designed to provide extra funding for those that had been victims of human trafficking.

S.178 was sponsored by Texas Senator John Cornyn and had 33 cosponsors, 21 Republican and 12 Democratic. The bill has also passed out of the Senate Judiciary Committee by a unanimous vote of 19-0.

Problems arose when Planned Parenthood objected and started lobbying against passage of the bill due to the following language, part of Section 2, titled the Domestics Trafficking Victims’ Fund:

Amounts in the Fund, or otherwise transferred from the Fund, shall be subject to the limitations on the use or expending of amounts described in sections 506 and 507 of division H of the Consolidated Appropriations Act, 2014.

Planned Parenthood’s statement objecting to the bill included “What victims of human trafficking need is access to health services and other support, not the accounting gimmick that Senator John Cornyn has offered.  His relentless effort to use the trafficking bill to advance an ideological agenda to limit access to abortion is part of a broader agenda that we are seeing all over the country at the state and now federal level.”

What they’re not stating is it that this language is only reaffirming what had already been spelled out in the Hyde Amendment, first passed in 1976 forbidding federal funding for abortions unless the pregnancy is the result of rape or incest.

The Democrats in the Senate claimed according to a Huffington Post report that the Republicans had slipped anti-abortion language into the bill. with Harry Reid stating, in that Huff-Po report that “these provisions, my caucus did not know about,” but, as stated previously the bill was cosponsored by 12 Democrats and passed out of the Judiciary Committee unanimously which including 8 Democrats.

As it stands presently the Justice for Victims of Trafficking Act of 2015 is stalled in the Senate the last vote taken was on March 19th where a vote on Cloture failed to move forward onto a final vote short of the 60 votes needed by a margin of 56 yeas (52 Rep. and 4 Dem.) to 42 nays (1 Rep., 39 Dem. and 2 Ind.)

What this boils down to is the typical gamesmanship that goes on in both Houses of Congress in order to bring about the oft stated goal of ‘achieving compromise.’ The problem arises that when only one side of the story makes it into the public narrative such as this quote from Al Sharpton in an April 20th Huffington Post oped.

Lynch’s confirmation delay is nothing more than bells, whistles and red meat for the right-wing. It’s yet another message that Blacks, women and quote “others” are expendable, and the least priority at best; they are in fact targeted by this crowd.

Sadly, all too often, the Republican leadership fails to make their case to the American public and instead cave into the pressure, capitulate to the Democrats position and hope that next time an issue like this arises that they, then, won’t be portrayed as racist, sexist, homophobic, xenophobic, etc., etc.

As of April 21st the Senate has reached a compromise on ending the Filibuster on the Justice for Victims of Trafficking Act of 2015 with the Washington post article stating  that “trafficking victims would instead be eligible for health care under a separate program already subject to the longstanding abortion restrictions known as the Hyde Amendment, which contains exceptions for cases of rape and incest.” After that vote has been completed Senate Majority Leader Mitch McConnell has pledged that he will move the confirmation of Loretta Lynch onto the floor for a vote.