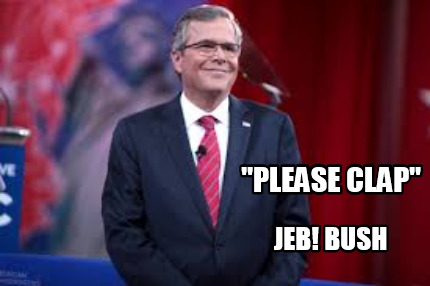 Let me start off by saying that I’m generally not a big fan of the “what if” approach to an argument or discussion but I have to admit that Ben Shapiro, in Townhall.com, makes some good points in “When Does Trump Become the Establishment?”

Mr. Shapiro asks the question on what if Jeb! Bush was our current President, what would be the reaction by many of the so called conservatives?

After conceding to his right flank during the election cycle that he would move to overturn President Obama’s Deferred Action for Childhood Arrivals program, Bush immediately backtracks and does nothing. Attempting to fulfill a campaign promise, he then pushes a bill that would supposedly repeal and replace Obamacare, except that the bill does no such thing. Instead, it makes significant changes to Medicaid but re-enshrines the central provisions of Obamacare while also creating a new entitlement program. The bill earns the support of establishment stalwarts ranging from House Speaker Paul Ryan, R-Wis., to Senate Majority Leader Mitch McConnell, R-Ky.

*For my purposes what the Republicans have formally named the American Health Care Act, or the AHCA, will be referred to as RINO(repeal in name only)Care, it has also been referred to by such names as RyanCare, SwampCare and ObamaCare Lite.

Can you imagine Donald Trump’s friend at Fox News, Jeanne Pirro, absolving Jeb Bush for the failure of the passage of RINOCare and stating that “Folk’s I want to be clear: this is not on President (Bush) no one expected a (former Governor) to completely understand the nuances, the complicated ins-and-outs of Washington and its legislative process?” I’m sure by sheer coincidence, earlier in the day, Donald Trump Tweeted out “Watch @JudgeJeanine on @FoxNews tonight at 9:00 P.M.”

Similarly can you imagine, if Jeb! Bush was our current President, that radio host and ‘staunch conservative’ Hugh Hewitt would appear on Meet the Press and state that the “loss isn’t on the President it isn’t on Paul Ryan and it is on the Area 51 sub-caucus of the Freedom Caucus, which believes in legislative flying saucers?”

For anyone still bemoaning the failure of RINOCare and blaming it’s loss on the true conservatives in the House of Representatives, those that truly believe in the Constitution, may I suggest Chris Pandolfo’s article at the Conservative Review: “Those Freedom Caucus ‘purists’ you’re bashing? New study suggests they actually SAVED the GOP.”

Members of the Freedom Caucus are under vicious assault by the media and by members of their own party — including the president — for allegedly sinking the GOP’s health insurance reform plan. New research shows, however, that the Freedom Caucus’ opposition to RINOcare may have saved the Republican Party from a rout in the 2018 midterm elections.

This is not to say that I have issues with much of what President Trump has initiated, such as rolling back many of the onerous regulations by the EPA, what I worry is that so much has been done by Executive actions rather than going through the Legislative process. Many times I warned those cheering on President Obama’s Executive Actions that they may not like what his successors implement. I would issue the same warning to those cheering the actions by the Trump Administration.