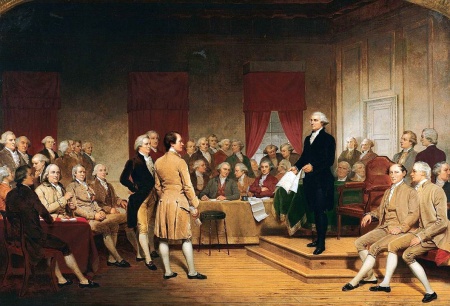 Congress shall make no law respecting an establishment of religion, or prohibiting the free exercise thereof; or abridging the freedom of speech, or of the press; or the right of the people peaceably to assemble, and to petition the Government for a redress of grievances.

A senior at James Madison Memorial High School in Madison, Wisconsin has received some attention lately, after  starting a petition at Change.Org, to have the name of her High School changed “to create a more inclusive environment for African-American students.” This is based on the fact that James Madison, one of our Founding Fathers and the fourth President of the United States had been a slave owner after inheriting approximately 100 slaves from his father at their Montpelier plantation. The petition currently has over 1400 supporters.

One thing of note is that in the petition and in an article in The Cap Times: “Student wants to change name of James Madison Memorial High School, citing former president’s slaveholding legacy,” all mentions of the school refer to it solely as Memorial High School, also, to point out the obvious, this is taking place in a city also named after James Madison, also notable is that the name of the school district is Madison Metropolitan School District (MMSD).

Personally I don’t fault this particular student for her actions, in fact, to an extent, I applaud her attempt, regardless of how misguided it is, in becoming involved in civic activities in her community. I don’t give the same pass to other areas across the country where they are seeking to rewrite or ignore history by seeking to rename schools, buildings, and removing historical figures. One city where this has been occurring is in New Orleans, where they have recently removed the statues of Confederate President Jefferson Davis, Confederate Generals Robert E. Lee and  P.G.T. Beauregard as well as the Liberty Place monument. This has been covered extensively by fellow Lanterneer Chris Pilie both in his blog posts as well as his Battlefield Live podcasts.

It should be unnecessary to point out that the period of slavery in the United States is a stain on our country but it was also a very complicated issue. Slavery needs to be studied in the context of the time period, the Founding Fathers varying opinions regardless of whether they owned slaves or not, different state laws that guided their actions and also how slavery had to be dealt with in order to have the US Constitution ratified by 13 very diverse colonies. Personally I would recommend Dinesh D’Souza’s movie “America: Imagine The World Without Her,” as well as the companion book by the same name for a more detailed explanation.

The student said that she was inspired to start the petition by an assignment in her “Social Justice Class.” I would like to suggest to the school that they spend less attention on social justice classes and spend more time on history classes especially where it comes to the history of the school’s, the school district’s and the city’s namesake. If they did they might learn that James Madison is credited with being the main architect behind the writing of the United States Constitution as well the Bill of Rights. They might learn that the First Amendment authored by James Madison includes five rights, including the right to “petition the Government for a redress of grievances.” Therefore making the point that the ability to start this petition without having the fear of government reprisal was brought to them by the man whose name they are trying to remove.