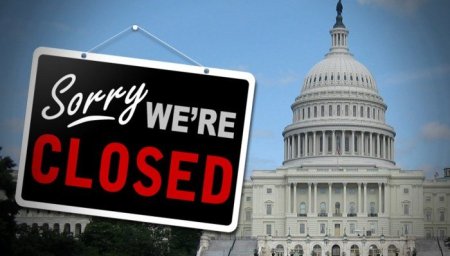 As of this writing, on Sunday evening, the federal government has officially been “shutdown,” due to Congress’s inability to pass any type of budget or spending resolution. Translated this means that approximately 20% (based on the 2013 “shutdown”) of federal employees, deemed non-essential, are on an unscheduled furlough until further notice. At least they will be on Monday morning since most were already due to be off over the weekend.

In an apparent effort to prove that all this is nothing but political theatre, any members of Congress that could find a microphone, a reporter, and/or access to their social media accounts spent the entire weekend doing nothing but defecting blame to everyone but themselves.

To likely no one’s surprise, the President of the United States had to join in the partisan bickering, tweeting: “Great to see how hard Republicans are fighting for our Military and Safety at the Border. The Dems just want illegal immigrants to pour into our nation unchecked. If stalemate continues, Republicans should go to 51% (Nuclear Option) and vote on real, long term budget, no C.R.’s!”

Great to see how hard Republicans are fighting for our Military and Safety at the Border. The Dems just want illegal immigrants to pour into our nation unchecked. If stalemate continues, Republicans should go to 51% (Nuclear Option) and vote on real, long term budget, no C.R.’s!

The final straw that led to the “shutdown” was when the Senate voted to reject cloture by a margin of 50-49 (60 yea votes were needed to accept) , this would have led to a final vote on the Continuing Resolution in the Senate that had already been passed by the House of Representatives.

The majority of the voting was typically along party lines with 45 of the Republicans voting yea to proceed and 44 (including the two that label themselves as Independent) of the Democrats voting nay. However, I did find it interesting that 5 Senators of each party bucked the majority in their respective parties.

All five of the Democrats have one major aspect in common, all are from states that have a heavy republican representation and in which Donald Trump’s margin of victory in 2016 ranged from approximately 20 to 40 percentage points in each of those states. A cynical person (myself included) might think that their votes on cloture were tainted by the fact that all, but Doug Jones who recently and famously defeated Roy Moore in a special election in Alabama, face re-election votes later this year.

On the republican side there is no such corresponding facet that ties all the 5 Senators together and I’ll leave it up to conjecture as to why they voted the way they did.

The bottom line to all this, is that the vast majority of the public, outside of the media and the Washington crowd, will suffer any long-term effects from the so-called government shutdown, however I do feel bad for those workers that will be inconvenienced in the short-term, from an unexpected lack of paycheck, due to the actions of a group of politicians who can’t consider much outside of their next election.