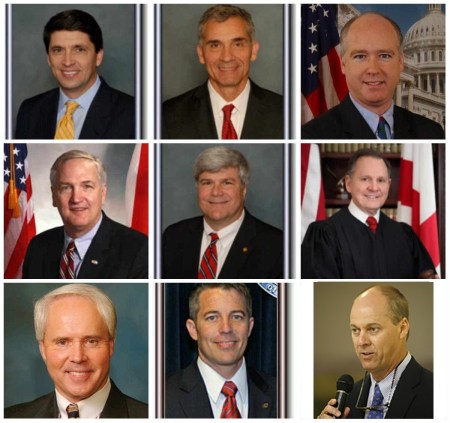 On August 15th Alabama will have a primary to select a replacement for the Senate seat vacated by Jeff Sessions following his appointment as the US Attorney General. The winner will serve until the 2020 elections.

In the event that no one candidate reaches 50% of the vote, each party will have a run-off on September 26th with the final election on December 12th. The primary and run-off elections are both open elections, in that one is not required to vote for the Party that they are registered to.

Neither of Alabama’s Senate seats have been held by a Democrat in this century, however that is a bit misleading since one of the seats had been held by Jeff Sessions since January 1997 and the other seat has been held by Richard Shelby who was first elected as a Democrat in 1986 but switched to Republican in 1994. Neither Senator has faced a serious electoral challenge since they first took office.

While most of the attention has been on the Republican side of the ticket, the top polling Democrats are Robert F. Kennedy, Jr. (not a member of the famed political Kennedy family) and Doug James.

Luther Strange: Originally Luther Strange was appointed by disgraced, former Alabama Governor Robert Bentley to hold Jeff Sessions seat on an interim basis to serve until a formal election could be held. I find it very doubtful that it was a coincidence that, at the time of the appointment, Mr. Strange had been Alabama’s Attorney General and was heading the investigation into the breaking of campaign finance laws by Governor Bentley as part of his extra-martial affair. In April Governor Bentley plead guilty to two misdemeanor charges and resigned his governorship as part of a plea bargain deal. An outline of Governor Bentley’s time in office can be found at AL.com: “Robert Bentley Resigns: Tracing the Rise and Fall of Alabama’s ex-Governor.”

In Luther Strange’s 6 months in the Senate, much like Congress itself, he has accomplished nothing of note, with a 100% record of voting with the Republican party. My biggest takeaway on Mr. Strange is how hard that Mitch McConnell and the groups that he controls are pushing to ensure Mr. Strange’s nomination including spending over $2 million in ads, most aimed at attacking Strange’s opponents.

Complicating matters, last week Donald Trump tweeted out his support for Luther Strange, what made this especially confusing it that this Tweet of support was in the same time frame that Donald Trump had also taken to Twitter criticizing Mitch McConnell’s inability to get any Legislation passed in Congress.

Senator Luther Strange has done a great job representing the people of the Great State of Alabama. He has my complete and total endorsement!

Judge Roy Moore: Roy Moore is most noted for his time as the Chief Justice of Alabama’s Supreme Court. His first tenure began in January of 2001, he was subsequently removed from office in November of 2003 for his refusal to have the Ten Commandments removed from the Alabama Judicial Building despite being ordered so by a federal judge.

Roy Moore was again elected as Alabama’s Chief Justice in January 2013 but again was beset by controversy this time in disagreement on the Supreme Court’s ruling on same-sex marriage. He was suspended from office in May of 2016 and subsequently resigned from Alabama’s Supreme Court in April 2017 after being charged with ethic violations for his refusal, along with instructing the lower courts, not to issue or honor licenses for same-sex marriages.

Last week the Roy Moore campaign started running it’s own ad in response to the Senate leader’s attacks on him.

Mo Brooks: Mo Brooks is currently serving in the US House of Representatives representing Alabama’s 5th C district winning his seat during the major Tea Party wave of 2010 where the Republicans took over the House Majority. Unlike so many Republicans that won seats in 2010 and 2012 he has kept the promises that he made to stick with his conservative principles.

Rep. Brooks is one of the approximately 30 members of the House’s Freedom caucus and has a 84% Liberty Score from Conservative Review and has an 87% Lifetime score from Freedomworks.

A satisfying point of Mo Brooks Congressional career occurred by in July of 2011 when he was on MSNBC discussing President Obama’s spending choices and had the following exchange, noted on TheBlaze, with host Contessa Brewer:

Brewer: We were looking at going–reverting a depression at that point. Everyone, the Fed Chairman–

Rep. Brooks: Well I disagree we were going into a depression, but go ahead.

Brewer: Do you have a degree in economics?

Based on my reading, listening and watching of various conservative outlets, including CRTV where Mark Levin supports Mo Brooks and Steve Deace supports Roy Moore, there has been no consensus of a preferred pick between Roy Moore and Mo Brooks.

Last Friday night Mark Levin’s show on CRTV (available to view free without subscription) was “The Case Against Mitch McConnell, The Case for America,” outlining McConnell’s war on the conservative movement. During that program I was reminded of the awful episode during the Republican run-off election in 2014 for Mississippi’s Senate seat between 6 term incumbent, Thad Cochran and Chris McDaniel. During that period the Republican leadership, including Mitch McConnell and Haley Barbour, employed such tactics as authorizing robo-calls to black democrats seeking to have them vote in the open Republican primary by implying the tea party and by extension Chris McDaniel had racist tendencies. In the end Thad Cochran won the election and is now approaching his 40th year in the Senate.

As always, with these type of special elections, anything is possible depending on who can generate the most excitement and turn out the most voters. Ideally, coming out of this weeks election, any shenanigans can be avoided in the run-off by having Roy Moore and Mo Brooks as the top two qualifiers.